Global value chains (GVCs) are seen by many, including the World Bank, as a promising remedy to slow growth in developing countries. Local firms can learn from foreign multinationals and thereby generate productivity growth. But ultimately this needs to translate into employment growth in decent jobs. Yet a new GPID working paper shows that employment growth is far from automatic in GVCs, contesting their appraised effect. Stefan Pahl reports key findings from the paper.

Industrialisation through exporting is seen as more ‘easy’ than ever due to GVCs. Developing countries can access global markets by carrying out only particular production stages, requiring few capabilities. There is consensus that participating in GVCs stimulates productivity growth through specialisation in core tasks, access to imported inputs, knowledge spillovers from multinationals and pro-competitive effects. Yet, it is often overlooked that this does not necessarily come with sustained employment growth. The most productive firms that do successfully integrate into GVCs might be good at boosting productivity but not so much at absorbing a large and unskilled labour force. Producing for global markets demands increasing levels of precision and adherence to quality standards, which requires more automation but less manual work. Furthermore, automation and other skill-biased technologies reduce relative demand for unskilled labour and might ultimately lead to reshoring of off-shored stages back to advanced countries (as argued e.g. by Rodrik). When true, GVC participation will benefit a small group of productive firms but provide limited opportunities for employment. We call this the ‘mixed blessing of GVCs’ hypothesis. 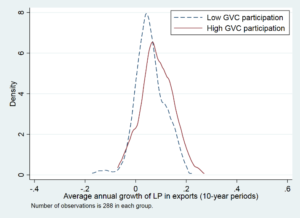 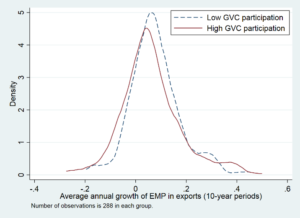 This finding holds up in further econometric work. In line with theoretical expectations, we find the productivity effect to be larger for countries further from the world productivity frontier. This makes it an important element in convergence of productivity levels, especially because it operates on top of the general trend of convergence in manufacturing (as found by Rodrik). There is no evidence, however, for a positive relationship between GVC participation and employment growth even when conditioning on other control variables and sets of dummies, or when investigating developing countries alone.

This suggests that GVCs are at best a mixed blessing. They boost productivity levels and foster convergence but do not necessarily generate employment in manufacturing. Clearly, some countries have upgraded through GVC participation, such as China or Thailand. Their success, however, might be dependent on particular domestic conditions. It is critical in the future assessment whether and which of these are in reach for developing countries that are typically small and cannot built from a base supported by buoyant domestic demand. We conclude that economic upgrading through GVC participation is possible, but far from automatic.

Stefan Pahl is a PhD student at the Groningen Growth and Development Center, University of Groningen. He works on issues of development and transition economics and macroeconomic questions. Stefan worked as consultant for UNIDO and IFPRI.