Have developing countries converged on advanced countries? This was a topic of much discussion in the 1980s and 1990s, and it recently resurfaced (see e.g. here or here). As the debate rages on, one element has gone unquestioned: the use of Gross Domestic Product (GDP) as a measure of growth. Our new GPID Working Paper closes this gap.

In the paper, we show how the assumption that GDP calculation is done in line with economic theory is incorrect – and that the changes made to GDP measurement over the past two decades have a bias towards countries traditionally in ‘the West’. As this has had a substantial impact on the assessment of comparative growth among countries in those two groups, we deem it as a form of kicking away the statistical ladder (following the famous metaphor of Ha-Joon Chang). It redefined the yardstick of development to fit the new strengths of now developed economies.

Examples include the reclassification of financial intermediation services, Research and Development activities (R&D) and owner-occupied dwellings as productive activities. This means finance has been ‘made productive’ (as Brett Christophers puts it), R&D is no longer considered an intermediate input and home ownership is now included in GDP in the form of the imaginary rent that homeowners would have paid to a landlord had they owned their home (with the peculiar effect of making countries with housing bubbles appear to grow more rapidly). A stark example of the effects of these changes can be seen in the output of USA and China. As Figure 1 shows, the reforms of the System of National Accounts (SNA) that determine how GDP is measured, first in 1993 and then 2008, had the effect of increasing the GDP of the US substantially, but not that of China.

Figure 1: Percent Impact of Changing the System of National Accounts (SNA) Methodologies on US and China GDP (differences between revised and non-revised GDP in 1993 and 2008) 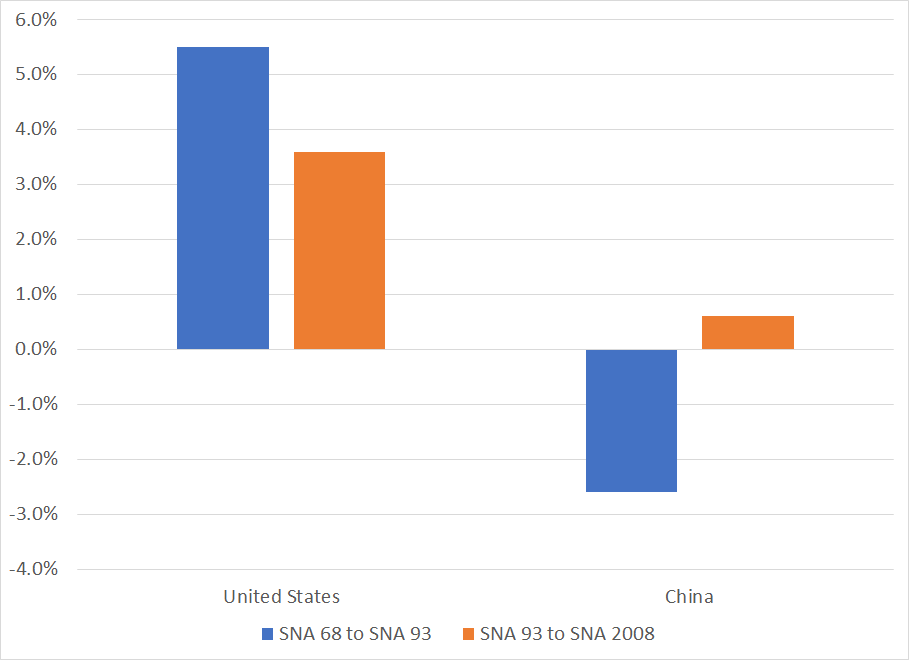 The graph above shows the percentage change in GDP due to the SNA reforms in 1993 (blue) and 2008 (orange). Data Source: United Nations, Main Aggregates and Detailed Tables (MADT) database.

We propose a measure called ‘Core GDP’ which excludes imputations and includes only what can be directly measured (following Basu and Foley 2013). Such directly measured industries include agriculture, utilities, manufacturing, retail trade, transportation, and communication. Core GDP correlates much better with employment trends than the now imputation-heavy GDP and is therefore more compatible with the inclusive growth envisioned in the 2030 Agenda. Figure 2 illustrates a substantial difference between how convergence is seen through Core GDP vs. standard GDP.

Figure 2: Average GDP of the ‘Rest’ as % of the West, alternative measures 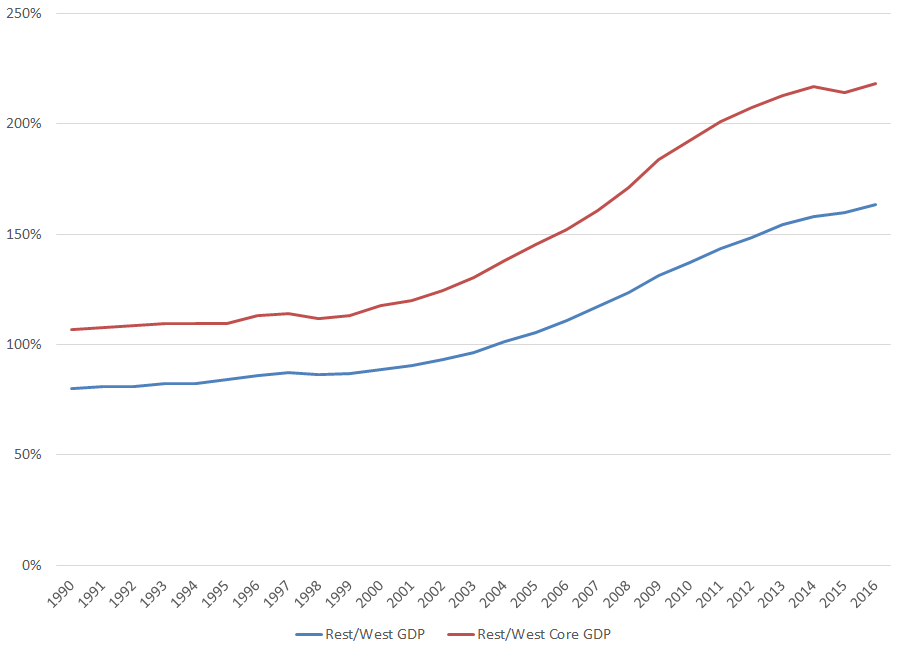 Source: Authors’ calculations based on GDP shares from the United Nations Main Aggregates Database and GDP in $PPP from the World Bank. The West is defined as Western Europe and its former settler colonies in North America and Australasia.

Beyond the convergence debates, there are geopolitical and political economy implications related to the measurement of GDP (see e.g. Coyle 2014). The way growth is measured has important implications for the types of sectors that are considered growth-enhancing. Political leaders have incentives to demonstrate to their populace that they can foster growth (Jerven 2012). Changes to how GDP is measured to fit the strengths of Western economies also increases these countries’ power in institutions that rely (at least partly) on economic size in their determination of votes, such as the World Bank and the IMF (a more subtle form of manipulation than that found by Wade 2013).

Given how central GDP is to economic reporting, research, and generally for our perception of growth in the world, we believe the definition of GDP should be brought into the public debate and be determined through a transparent and democratic process. We hope this paper can be a step towards that goal.

Jacob Assa is Policy Specialist at the United Nations Development Programme (UNDP) and holds a PhD in Economics from the New School (all views of are those of the author and do not represent the view of the United Nations).

Ingrid Harvold Kvangraven is a Lecturer in International Development at the University of York. She has a PhD in Economics from The New School and blogs at developingeconomics.org.